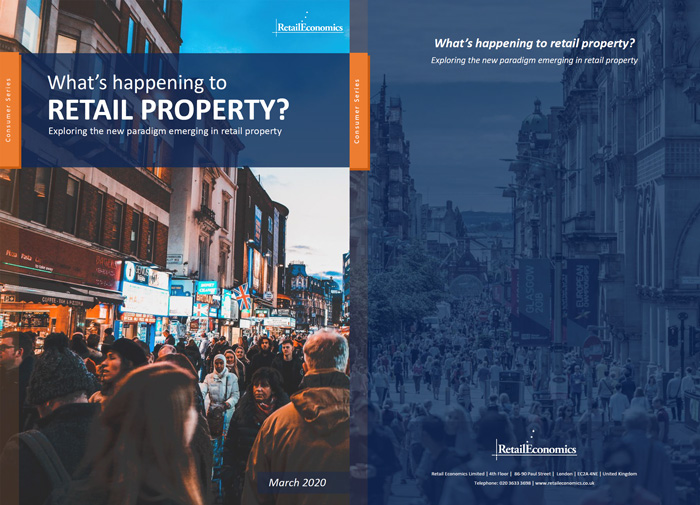 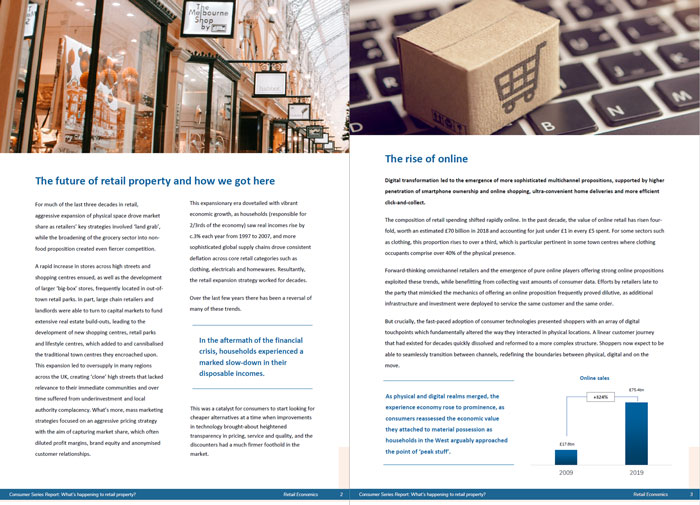 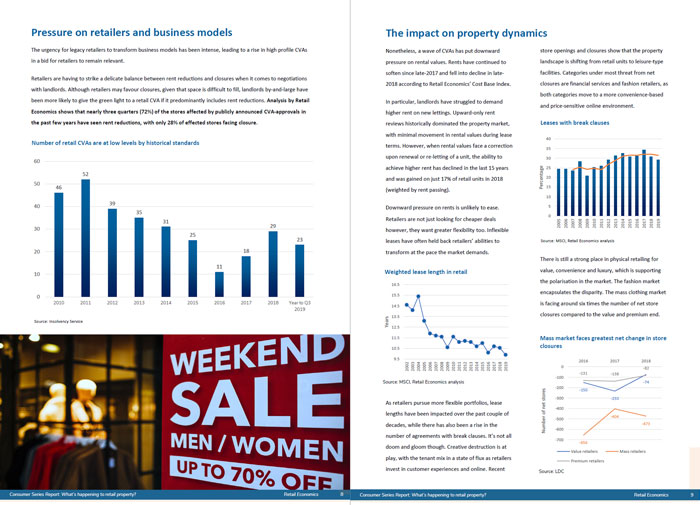 Download your free pdf copy of this report. Please complete the form opposite, or sign up for a free trial membership.

For much of the last three decades in retail, aggressive expansion of physical space drove market share as retailers’ key strategies involved ‘land grab’, while the broadening of the grocery sector into non-food proposition created even fiercer competition.

A rapid increase in stores across high streets and shopping centres ensued, as well as the development of larger ‘big-box’ stores, frequently located in out-of-town retail parks. In part, large chain retailers and landlords were able to turn to capital markets to fund extensive real estate build-outs, leading to the development of new shopping centres, retail parks and lifestyle centres, which added to and cannibalisedthe traditional town centresthey encroached upon. This expansion led to oversupply in many regions across the UK, creating ‘clone’ high streets that lacked relevance to their immediate communities and over time suffered from underinvestment and local authority complacency. What’s more, mass marketing strategies focused on an aggressive pricing strategy with the aim of capturing market share, which often diluted profit margins, brand equity and anonymisedcustomer relationships.

This expansionary era dovetailed with vibrant economic growth, as households (responsible for 2/3rds of the economy) saw real incomes rise by c.3% each year from 1997 to 2007, and more sophisticated global supply chains drove consistent deflation across core retail categories such as clothing, electricals and homewares. Resultantly, the retail expansion strategy worked for decades.

Over the last few years there has been a reversal of many of these trends.This was a catalyst for consumers to start looking for cheaper alternatives at a time when improvements in technology brought-about heightened transparency in pricing, service and quality, and the discounters had a much firmer foothold in the market.

The rise of online

Engaging in meaningful experiences has become a differentiator of choice for many consumers. An abundance of material possessions has left consumers attaching more value to experiences; evidenced by the reduction in retail spending from 30% of household expenditure in the 1960s, to 27% in 2004 and 24% in 2016. Our forecasts suggest that this will fall further to 20% in the next 10 years.

Although the shift towards experiences has arguable come at the expense of retail, its role in the customer journey is undeniable. While consumers claim to spend more time browsing products online than they do in-store, the relative importance in the discovery and research of retail products is more influential in physical locations, in particular flagship destinations where ‘experiences’ matter.

Retailers and landlords alike recognise that staging meaningful experiences are critical in the moments that matter: moments of discovery; moments of desire; and moments of action.

Against these seismic shifts, retailers have also faced a backdrop of spiralling operating costs. Successive rises in business rates, National Living Wage (NLW), National Minimum Wage (NMW), logistics, utilities and other central costs has put intense pressure on profitability. Indeed, the Retail Economics Retail Cost Base Index shows that operating costs rose by 2.4% in 2018. However, over the last five years, operating costs facing retailers have risen by 10.8%, with labour costs constituting more than half of the increase.

Indeed, consecutive increases in NLW and NMW and costs associated with the Apprenticeship Levy have driven an acute rise in labour costs which constitute around 46% of total operating costs. Wage hikes among lower paid groups have a ‘ripple effect’ across entire wage distributions as businesses retain wage differentials. We estimate that the increase in NLW costs the industry in the region of c.£1.5bn per year to implement.

Business rates also remain a significant burden on retailers who have a disproportionate exposure to property. Retail Economics estimates that business rates cost the retail industry an estimated £7.5bn in 2018, and in some parts of the country exceed retailers’ rental values.

How has the industry reacted?

The collision between these seismic structural shifts, rising operating costs and squeezed profitability has led to a broad polarisation in the retail property market.
On the one hand, these challenges have led to a host of high profile retailers such as New Look, Toys R Us and Debenhams either closing their doors for good or cut back on the number of stores as they restructure.

What’s more, landlords are finding it increasingly difficult to reoccupy empty units. Vacancy rates across high streets (11.5%), shopping centres (13.6%) and retail parks (7.1%) in the second half of 2018 all rose on the previous year. Retail park vacancy rates are now at their highest level since 2014.

As a result, the industry has seen a rise in the number of retail redundancies, as well as cutting back on hours worked and reducing employee benefits. In the 12 months to March 2019, 4,500 retail jobs have been lost every month and the number of employees in the industry has been steadily declining c.1% each year since 2015... [extract]

You have two options to download a free PDF copy of this report:
1. Complete the form at the top of this page
2. Take out a FREE 30 day membership trial and access this and many other reports 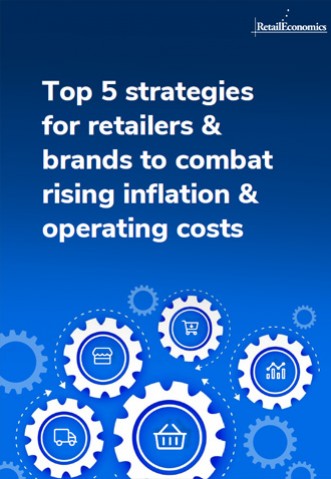 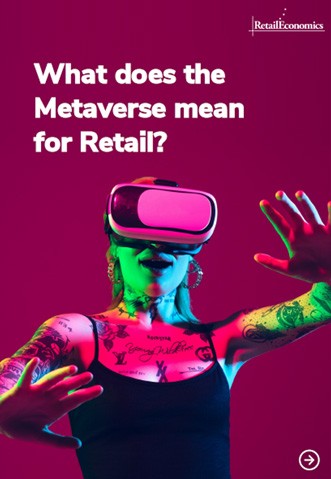 Impact of the metaverse on the retail industry

Is the metaverse going to be the next big thing? Download our report to find out what retailers should be thinking about & how customer journeys could change. 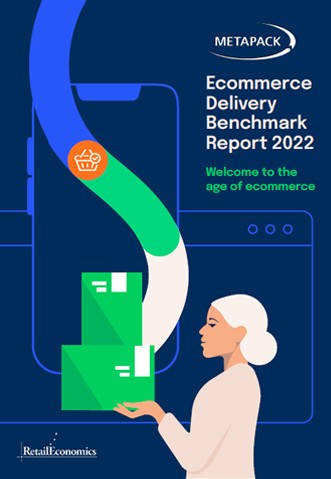 The Future of Online Delivery for the Retail Industry

Discover the impact of the ongoing shift to online retail within key European markets & how it's affecting consumer behaviour & retailer's operations. 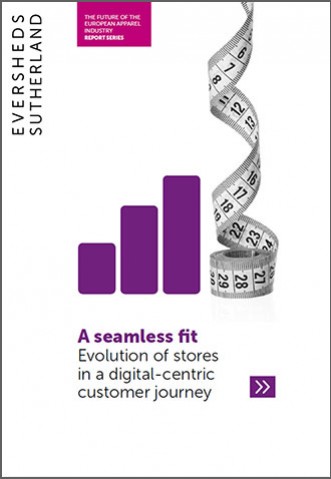 See where the future of the European apparel industry is heading & how physical stores & their purpose is fast evolving. 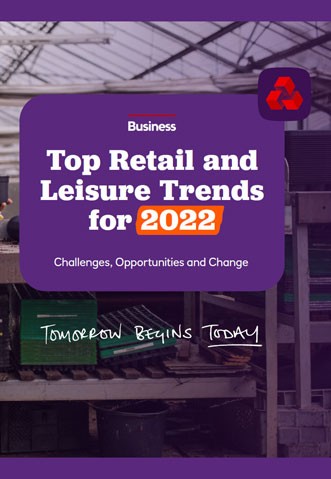 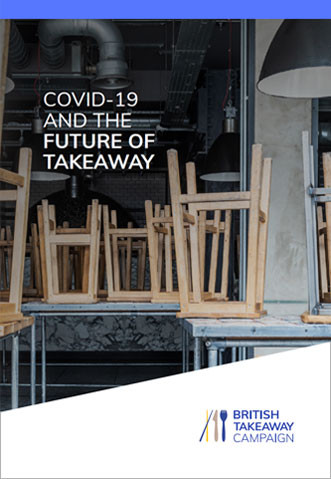 Covid-19 and the Future of Takeaway

This report looks into the valuable economic, social and cultural contribution made by the UK takeaway sector in 2020. 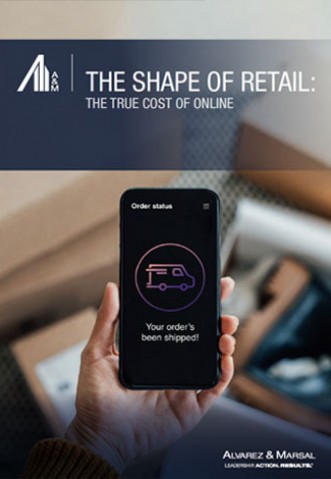 The True Cost of Online Retail 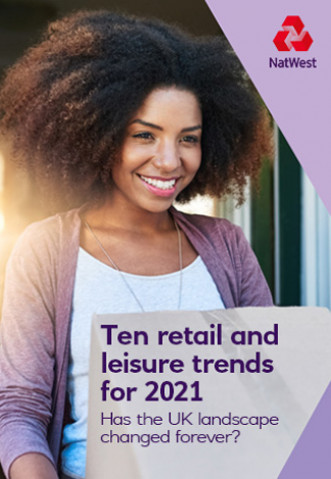 Outlook for UK Retail and Leisure 2021

This report looks at challenges facing UK retail in 2021 in context of Covid-19 & other key structural changes unfolding. 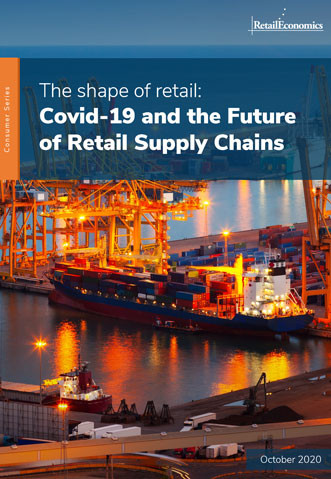 Covid-19 and the Future of Retail Supply Chains 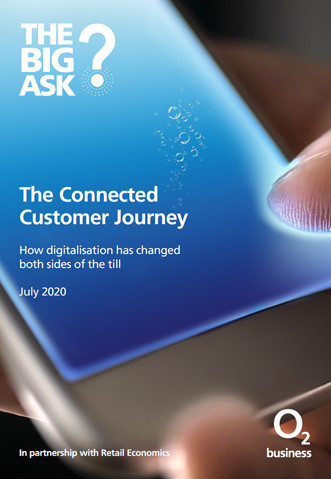 Explore the connected retail customer journey & the importance of digital as online engagement soars in this current era. 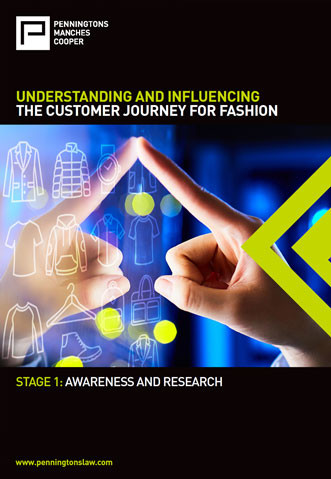 Understanding the retail customer journey for the fashion industry 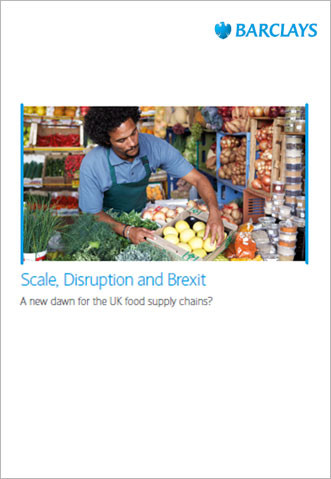 In a pre-Covid era, this research report looks at consumer behaviour & the impact of Brexit on how consumers shop for Food. 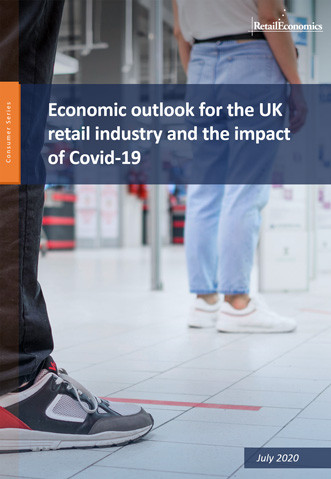 Explore the outlook for the UK retail sector & 5 underlying trends that will reshape the industry from Covid-19 impacts. 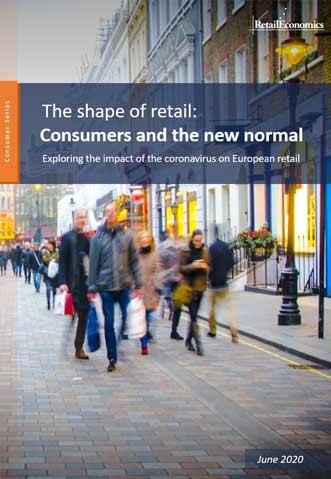 Consumers and the New Normal: Exploring the impact of the coronavirus on European retail

What is the 'new normal' going to look like for retail in the EU? This report examines this in detail & offers insight. 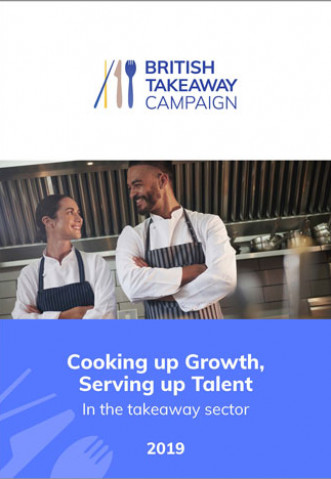 The Contribution of the Takeaway Market to the UK Economy

How does the UK takeaway industry impact the UK economy? This report looks at the valuable economic & social contribution. 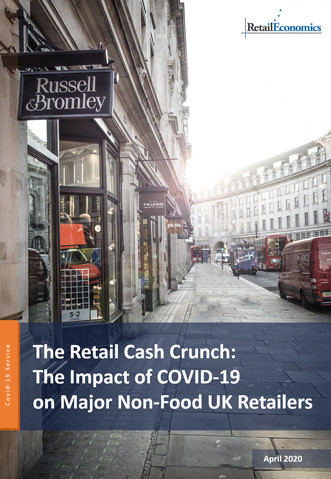 The Retail Cash Crunch: The Impact of COVID-19 on Major Non-Food UK Retailers 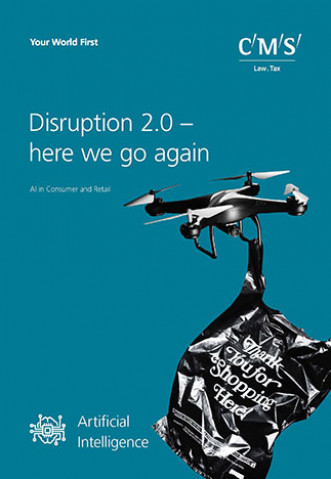 The impact of AI on the UK retail industry

A look into how artificial intelligence (AI) is impacting the UK retail industry, at all stages of the customer journey. 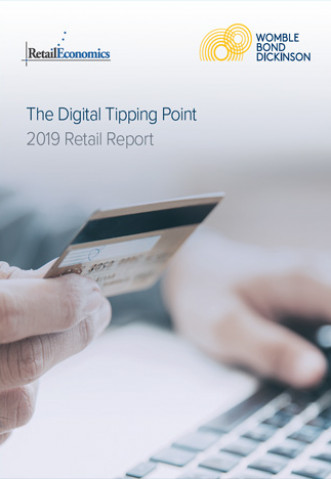 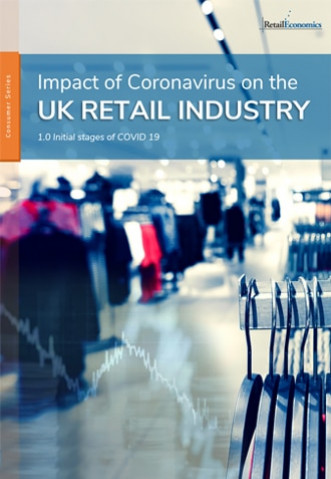 Impact of the Coronavirus on Retailers

This report explores the impact of the initial stages of Covid-19 on the UK retail & leisure industry back in March 2020.

The outlook for the UK retail industry 2020 from a pre-Covid-19 perspective. Research, commentary & analysis of factors. 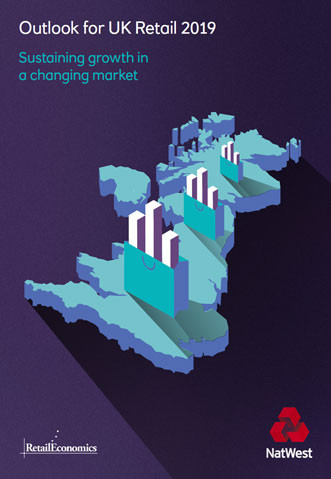 Find out what's in store for UK retail in 2019 & beyond. Discover current factors affecting retailer and consumer alike. 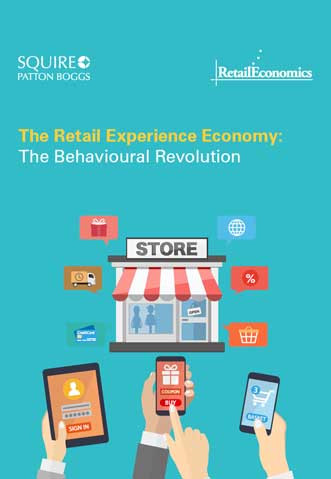 This work explores four realms of retail experiences that have been quantified & discusses their impact shopper behaviour.
Explore All Reports