Retail sales (value, non-seasonally adjusted, excluding fuel) rose by 3.3 per cent in May 2017 year-on-year, according to the latest figures from the ONS. This was down on the previous month (+8.3 per cent). In volume terms, retail sales rose by 0.6 per cent on last year (seasonally adjusted, excluding fuel). This was the lowest year-on-year growth since April 2013.A more accurate reflection of underlying trends, shown by the 3-month on 3-month growth, showed an increase for the second consecutive month. In the three months to May 2017, sales volumes increased 0.4 per cent.Average store prices (excluding fuel) increased by 2.8 per cent on the year— the largest growth since March 2012. On a month-on-month basis, prices increased 0.6 per cent. Food stores saw the biggest increase in prices since November 2013, up 2.5 per cent, while non-food stores demonstrated their biggest increase since October 2011, up 3.0 per cent in May, compared with the same month a year ago.Online sales (seasonally adjusted, excluding automotive fuel) increased year-on-year by 14.4 per cent and fell by 0.1 per cent on the month, accounting for approximately 15.9 per cent of all retail spending. 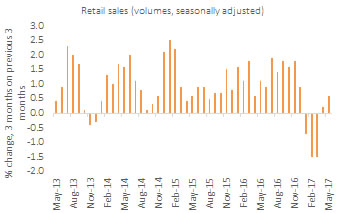 Source: ONS    These latest set of retail sales figures from the ONS chimes with other data released showing consumer spending slowed in May. Indeed, data released by Visa last week showed consumer spending was in decline for the first time in nearly four years. The higher-than-expected rise in inflation on Tuesday intensified the pressure on household finances, pushing real wage growth deeper into negative territory. With underlying conditions for households set to weaken further in the coming months, we anticipate consumer spending to continue to fall back.