Retail sales (value, non-seasonally adjusted, excluding fuel) rose by 3.3 per cent in March 2017 year-on-year, according to the latest figures from the ONS. This was down on the previous month (+4.7 per cent). In volume terms, retail sales rose by 2.6 per cent on last year (volume, seasonally adjusted, excluding fuel). A more accurate reflection of underlying trends, shown by the 3-month on 3-month growth, showed the third consecutive decline in retail sales. Looking at the quarterly movement, the 3-months to March 2017 is the first quarterly decline since the final quarter of 2013.Average store prices (including fuel) increased by 3.3 per cent on the year, the largest growth since March 2012; the largest contribution came from petrol stations, where year-on-year average prices rose by 16.4 per cent. Online sales (excluding automotive fuel) increased year-on-year by 19.5 per cent and by 0.5 per cent on the month, accounting for approximately 15.5 per cent of all retail spending. 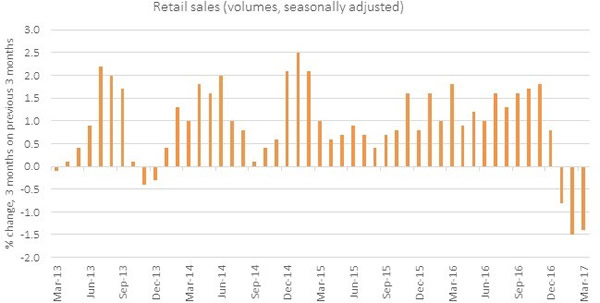 Source: ONSThis latest data showed that the surge in inflation is putting retailers under intense pressure with the first quarterly decline in retail sales since 2013. Families are facing the fastest rise in living costs for over three years and they are reining in their spending. Indeed, our recent Shopper Sentiment Survey found 43 per cent of consumers suggested they had adopted more cautious spending habits over the last three months citing Brexit and personal finances as their main concerns. Furthermore, we forecast that real earnings are likely to start to shrink by mid-2017 which will put further pressure on the retail industry.Click here for the latest Retail Economics Shopper Sentiment Survey: April 2017We will need to unravel the ONS figures carefully to give a more in-depth view – watch out for our monthly UK Retail Sales report released next week.