Retail sales (volumes, seasonally adjusted, excluding fuel) rose by 2.2 per cent in January 2017, according to the latest figures from the ONS. This slowed sharply from the growth of 7.0 per cent, year-on-year, reported in December. There was a sharp slowdown in Food sales which fell by 1.0 per cent, year-on-year — the weakest growth since October 2015. Non-Food sales rose by 2.9 per cent which was the weakest since September last year. In volume terms, retail sales rose by just 1.5 per cent on last year, and was the weakest growth since November 2013. Sales volumes (excluding fuel) were the weakest since September 2014. Average store prices (including fuel) increased by 1.9 per cent on the year. The largest contribution to this increase came from petrol stations where year-on-year average prices were estimated to have risen by 16.1 per cent.Online sales increased by 10.1 per cent year-on-year, but fell on the month by 7.2 per cent. In January, online sales accounted for approximately 14.6 per cent of all retail spending.It appears that the long-awaited slowdown in household spending has materialised with force. The combination of rising inflation and continued weak earnings growth has eroded households’ spending power. Nevertheless, this contraction is much more severe than we had expected and shows that the reality of squeezed personal finances has hit consumers hard. There are also growing concerns that spending has become increasingly debt-fuelled. The latest data showed unsecured lending rising at the fastest pace since the financial crisis. What’s more, repayment of debts was one of the biggest concerns for consumers heading into 2017, according to our research. This is likely to be the first real sign of much more challenging times ahead.We will need to unravel the ONS figures carefully to give a more in-depth view – watch out for our monthly UK Retail Sales report released next week. Retail sales (value, non-seasonally adjusted) year-on-year growth 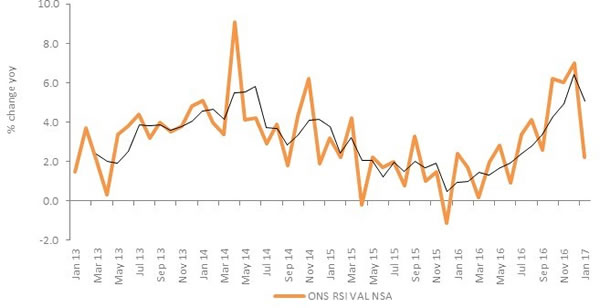