Retail sales (value, non-seasonally adjusted, excluding fuel) rose by 8.1 per cent in April 2017 year-on-year, according to the latest figures from the ONS. This was up on the previous month (+2.4 per cent). However, the non-seasonally adjusted figures are heavily distorted by the timing of Easter which fell in April 2017 but in March in the previous year. In volume terms, retail sales rose by 4.5 per cent on last year (volume, seasonally adjusted, excluding fuel). A more accurate reflection of underlying trends, shown by the 3-month on 3-month growth, showed an increase, after three consecutive months of decline. In the 3-months to April 2017 sales volumes increased 0.3 per cent. Average store prices (including fuel) increased by 3.1 per cent on the year, down from 3.3 per cent in March 2017. On a month-on-month basis, prices fell 0.2 per cent.Online sales (seasonally adjusted, excluding automotive fuel) increased year-on-year by 19.0 per cent and by 1.9 per cent on the month, accounting for approximately 15.6 per cent of all retail spending. 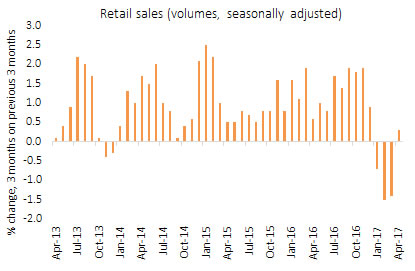 Source: ONSThis latest data showed that consumers shrugged off any Brexit and political uncertainty, with sales growth beating expectations. At first glance it appears that worries about the surge in inflation and squeeze on household finances were put on hold in April. However, given real earnings are now in negative territory, we expect to see consumers rein in their spending in the coming months.A more in-depth view will be released next week in our monthly UK Retail Sales report.