The Consumer Prices Index (CPI) rose by 1.6 per cent in December on the previous year, up from 1.2 per cent reported in November – faster than expectations. Inflation is now rising at its fastest rate since July 2014 when it was 1.6 per cent. The main contributors to the rise in the rate of inflation was air fares and food prices, along with the price for motor fuels which fell more slowly than it did this time last year. On a month-on-month basis, food rose by a punchy 0.8 per cent. Core inflation continued to rise, up 1.4 per cent compared with the previous year – the highest since August 2014.Chart 1 - Contributions to the CPI 12-month rate CPI – December 2016 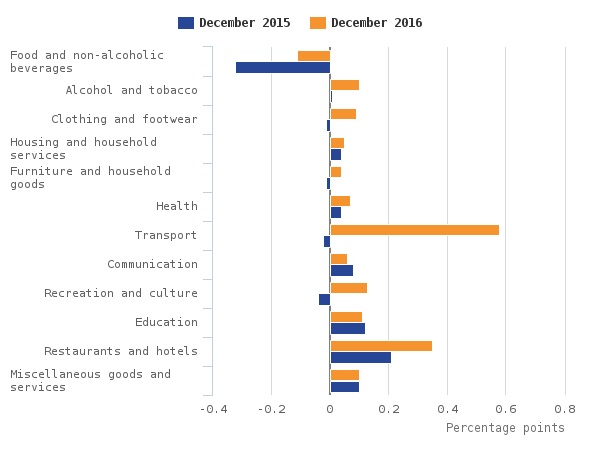 Source: ONSThe acceleration in core inflation demonstrates that the rise in import goods, resulting from weaker sterling, is feeding through to consumer prices. While the typical lead time between movements in exchange rates and CPI is around 9-12 months, we’re currently seeing the thin end of the wedge emerging. There is plenty more to come over the following months with our forecast suggesting inflation will hit 3 per cent by the Autumn. Indeed, inflation could be as high as 2.5 per cent by Easter. Although the Bank of England’s forecast is for inflation to rise to 2.8 per cent in 2017, CPI is already 0.2 percentage points higher than they had expected it to be when they published their forecast in November. In sterling terms, oil prices are 10 per cent higher than they were three months ago and there is scope for sterling to weaken even further. Considerable uncertainty remains and sterling will remain reactive to market-moving speeches from politicians.Chart 2 - CPI 12-month inflation rate 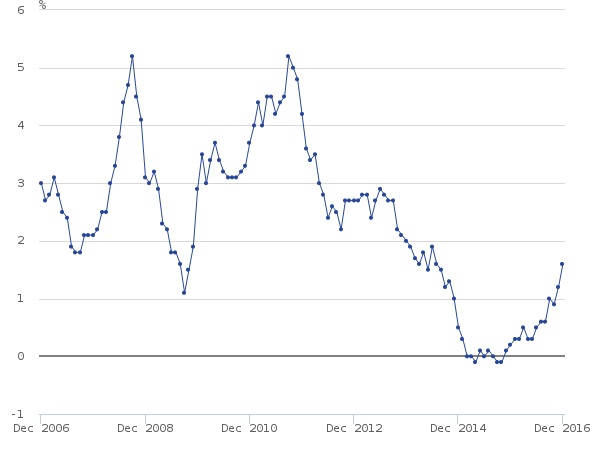